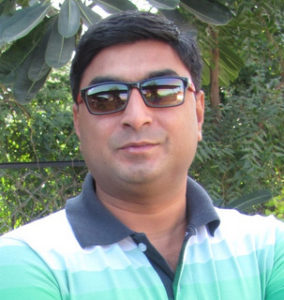 Goats are among the main meat-producing animals in India , whose meat (chevon) is one of the choicest meats and has huge domestic demand. Due to its good economic prospects, goat rearing under intensive and semi-intensive system for commercial production has been gaining momentum for the past couple of years. High demand for goat and its products with potential of good economic returns have been deriving many progressive farmers, businessmen, professionals, ex-servicemen and educated youths to take up the goat enterprise on a commercial scale. The emerging favourable market conditions and easy accessibility to improved goat technologies are also catching the attention of entrepreneurs. A number of commercial goat farms have been established in different regions of the country. An unemployed agricultural graduate Mr. Deepak Patidar resident of village-Sundrail, District-Dhar, Madhya Pradesh attended a Training Programme on Commercial Goat Farming organized by CIRG, Makhdoom for 10 days in the year 2000. Being inspired and motivated by the scientists of CIRG he started a Goat Farm (Ekta Agronomic and Livestock) in his village in the year 2001. The farm was established with 60 local goats reared under stall-fed intensive system of management. Initially he faced a number of problems like high cost of production, mortality and low price of the produce. Under a project on Commercialization of Goat farming and Marketing of Goats in India , the scientist from CIRG visited his farm and suggested changes like breed (Sirohi), preparing pure breed animals as breeding stock and effective marketing strategy and strengthening linkages with the other farmers. Simultaneously he also received technical guidance from the scientists of CIRG on health management of goats. Accordingly Mr. Patidar introduced changes in his goat farm. Consequently his goat farming project became viable and profitable. Mr. Deepak Patidar remained continuously in touch with the scientists of CIRG through Scientist-Farmer Interactive Meets and Seminars and has been using latest scientific information on goat production for his benefit. The mortality in adults and kids, which was 10 and 40% respectively in the beginning, now has decreased to about 3% to 8 % per annum. Presently he has 180 goats in his farm and prepares pure breed animals mainly of Sirohi breed of goat for selling them as breeding stock to the farmers and entrepreneurs. He also has some goats of Barbari , Jakhrana and Janumapari breed. He sells his goats only on live body weight basis at the rate of Rs. 120 to Rs. 200 per kg of live body weight. At present the annual gross revenue of the goat farm is Rs. 4 to 5 lakhs and total annual expenditure is Rs. 1.5 to 2 lakhs giving an annual net income of Rs. 2 to 3 lakhs. Mr. Patidar has become a well recognized commercial goat farmer of Indore Region and various related government departments, NGOs and farmers consider him as a progressive goat farmer. He is being invited as a resource person on goat husbandry in different training programmes organized by the Animal Husbandry department and local NGOs. Till date about 1000 farmers and trainees have visited his farm. Now he is developing and strengthening linkages with the small/ traditional goat farmers of the area for taking up breed improvement and organized marketing.